Planning Marketing Campaigns in Excel: Don’t Do It!

Excel and Master Data are not compatible. I’ve no problem with people using Excel for managing their accounts, for complex calculations, pivot tables and macros. But please don’t use it to manage customer lists for marketing. It simply doesn’t work. There are many who speak from bitter experience. They have tried to master campaign management in Excel, but without success. In this article I describe a real-life case. A tragedy in eight acts.

It’s actually a true story. Our protagonist – let’s call him Peter – was responsible for campaign management for a medium-sized company with tens of thousands of customers. The data was in silos with no interfaces and no means of exchange.

One day, Peter is given a task by his boss. He is to set up a customer database, in which he is supposed to enter all customers contacted in the course of a campaign.

Then comes the kicker: He has to use Excel.

And as if that weren’t bad enough, he also has to record every interaction with customers and prospects, for example participated in competition x, claimed customer bonus y, and so on. For every campaign or activity there is therefore a column, in which an X should be entered to indicate participation or else be left blank. Piece of cake!

I know what you’re thinking: How is that going to work? That’s exactly what Peter thought. He knew that it was a crazy idea. But he got stuck in and began working on a solution.

Problem 1: Too much data and no matches

He got the lists for all previously executed campaigns. He soon found himself with tens of thousands of records. Then the fun really began, when he discovered that the lists came from different databases. Some lists had the first name while others had the last name, the postal code and city were mixed up, some columns were available in one list but not in another, first name and last name were in the same field instead of separate, and so on. He had no choice but to bite the bullet and just update the lists manually.

Problem 2: How to address customers

What title do you give your customer? It makes no difference 90% the time. But you still need to have it. Or do you get around it by saying “Dear Sir/Madam” when writing to your customers? Exactly. You have to update your data manually. Albert: Man. Margaret: Woman. Petra: Woman. Martin: Man. And so on – for hours on end.

Duplicates were another headache for Peter. He thought that the “Remove duplicates” function would solve the problem. But no matter what he did, he caught either too many or too few duplicates. Things were about to get even worse. Peter had created a lot of columns and used an X to indicate whether someone had taken part in a campaign or not. How could he eliminate the duplicates in such a way that all Xs stayed where they were supposed to?

So, the list had been created. Duplicates had been eliminated, all information had been captured as effectively as possible. Everything was cool. Now came the real fun. Peter’s boss said that he’d like to update the list daily. In Excel. Manually. In other words, enter all new campaigns and eliminate duplicates (without losing any information). It sounded pretty unrealistic given the fact that mailings were often sent to several thousand customers or prospects.

People and companies move and change phone numbers, companies cease operations. How on earth could all of these changes be incorporated into Peter’s Excel list. Yes, really. How?

When a new campaign was being launched, it was Peter’s job to collect and clean up the necessary data. However, this data was stored in three different silos. He had to approach each admin individually and beg for an export. He was usually given a list with thousands of entries, all in triplicate, of course, because there were three databases. So, he had to once again clean up everything, add a title and delete duplicates. And he had to do it all manually.

Being a Campaign Manager is a full-time job. Peter had a huge workload that consumed between 8 and 9 hours every day. Time quickly runs away from you when you have to spend between 1 and 2 hours every day just updating a list. On top of that, there were big campaigns for which he could easily spend days cleaning up data.

Boss: “How did the last mailing do?” Peter: “Just a second. I need to quickly create a database export, enter all 5,000 records manually in my Excel list and then clean the whole lot up.” Creating reports, while possible in theory, would have been an absolute nightmare. Thankfully, it never came to that,

The final act in this tragedy came on the day that Peter had to his present his solution to the team. The first comment came from the Head of Customer Service, who rejected the idea out of hand, saying: “You can forget about that. It’ll never work!” At least there was someone else who understood how Peter felt.

You are not alone

Do these problems sound familiar to you? Am I expressing exactly what you feel? Then I’ve got some good news for you: you are not alone. There are experts who can help you. Nobody needs to manage customer lists in Excel. It simply doesn’t work. The program isn’t designed for it.

But: there are providers who can take care of your data. They filter out duplicates. They update incorrect information and add anything that’s missing – for example the title. They create the perfect data and are able to integrate it into a proper CRM system.

They even give you more information if you need it. Payment method? Check! Company size? Check! Industry? Check! You get the perfect basis for successful marketing or for accurately assessing the level of risk in your portfolio.

And they ensure that your data is still up-to-date after a year, for example using interfaces. It's magic!

Peter would also have slept better at night. I’m certain of that.

Why data is so important for marketing

Are you planning new adventures in marketing and sales? If so, you have to accept that you’re going to need to use data.

We’ve put together an infographic of the top 10 reasons and tips for data-driven marketing. 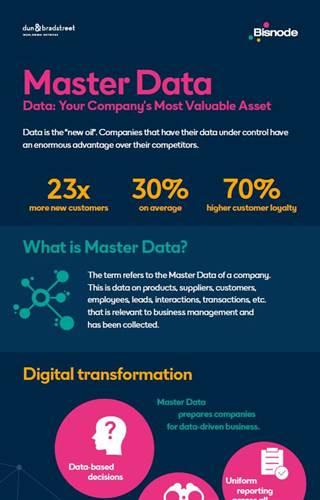 ​Please check your mailbox for the infographic