Survive and thrive in this world of hyper-disruption

Support your business resilience with data to deal with shifting sands

The world as we knew it has been turned upside down by a pandemic and a war, shattering supply chains and spooking markets. Uncertainty about the future presents enormous challenges for societies, states and the services meant to help them.

How can businesses not just endure, but enhance, their ability to make data-driven decisions that are both commercially and ethically viable?

At the Dun & Bradstreet 'Power of Data' event, leading experts shared their insights and foresights. 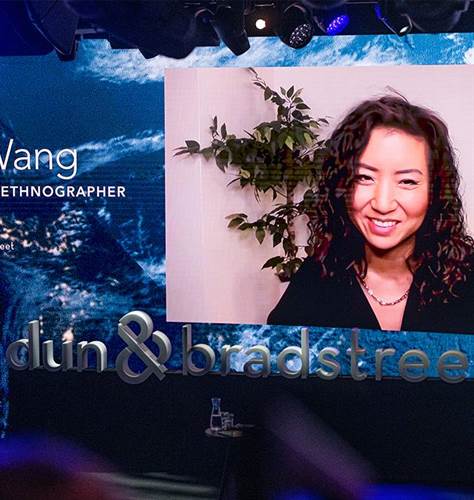 Consumer habits change as soon as opportunity presents itself, but do businesses always know how the habits are changing? What is data not showing us?

When smartphones came along, many consumers in mega market China bought iPones. No, that's not a typo, but these were not genuine iPones. Which meant that iPhone sales figures did not reveal just how much people wanted to get rid of their old phones and embrace the future.

There are many examples of quantity being mistaken for quality. "We have an idea that more data will lead to better decisions," global technology ethnographer Tricia Wang told the Power of Data audience. "That idea is so ingrained that it's difficult to question, but, in fact, data can lead you astray if it's not founded in context."

The limited value of quantitative information became evident three years ago. "Third-party data was useless in the face of covid," says Wang about the swift and profound changes to customers' lives. "People moved, people resigned, people got divorced more often in some countries and less often in others," she offers as examples.

Looking up from the computer to see and understand the customer empowers data-driven decision making. Without context the data is "flat" and paints a “low-resolution" picture, Wang said. Adding qualitative information can create "thick data" and the picture goes from low-res to high-res.

At the Power of Data event, former prime minister of Finland, Alexander Stubb stepped back in time. Not to learn the lessons of the past, as the saying goes, but to point out that we got a lot of lessons wrong.

We assumed, for example, that liberal democracy and globalization had won over autocracy and protectionism. They hadn't. "So will we have digital democracy or digital dictatorship?" asked Stubb. Will conflict be local or global? Will tech be used to benefit the individual, the state or the corporation?

There are also what Stubb calls "structural megatrends" without historic precedent. Firstly, game-changing demographic shifts. As Europe goes grey, Africa median age has become younger. But how we respond to this is an open question. Secondly, the climate crisis. Which countries will commit to going green, which ones won't? Are there compromises or just roadblocks?

Knowing that we can't know the future can, although it sounds paradoxical, be an asset. Resilience relies on preparing for different versions of the future, because being caught off guard is too expensive. "When we make crisis-driven decisions we make suboptimal decisions," said Stubb.

So, what does this multi-layered uncertainty mean for data collection, analytics and usage? What about data privacy? Stubb handed those tech questions over to the Power of Data audience with a final observation. "We're going to have to deal with some uncomfortable moral dilemmas."

THE RISK OF INCOMPETENCE
How do you follow the rules when you don't know how to?

As the European Union prepared the General Data Protection Act (GDPR), corporations had to face an uncomfortable truth – their own lack of competence. That's an observation from human rights lawyer Parul Sharma when talking about compliance. "Lack of competence is now regarded as a high-level risk," Sharma said. "You will be obliged to report on what you've done to raise and recruit competence."

Also, making sure partners have the capacity to nurture environmental, social and corporate governance (ESG). "You don't just abandon high-risk business partners, you have to hold their hand," said Sharma. "Do you have the resources and competencies to do this hand-holding?"

ESG cannot be successful without looking ahead. "With this new legilization coming up we are forced to have a more futuristic outlook that's not based on looking back in the rear-view mirror at quarterly reports," Sharma said.

At Power of Data, Sharma shared the stage with Kent Eriksson, professor of applied business studies. "There are still companies who think these issues are optional," Eriksson said. "But we will see more rules and regulations. Customers need and want sustainability. And remember that one dissatisfied customer has more power than ten satisfied ones. This is true also for ethical mistakes which will be covered by the media as well."

Eriksson pointed out that sustainability is a moving target. "Standards change all the time; society changes. You need to continuously develop science-based methods and use metrics to get to know how sustainable your corporation is," Eriksson said. "To do that you need advanced competence development, which won't be problem when all levels of a company see sustainability as important."

GDPR will look tame compared to some regulations being discussed and drawn up across the world. Such as giving people the power to collect data, aggregate it, store it and then, when it suits them, share specific information with specific actors they can set a time limit for access and in other ways control where their data ends up. "This really shifts the balance of who controls the data and what it’s used for," said quantitative futurist Amy Webb.

But will individuals want to engage in what looks like quite complicated curation? "Don't assume that the customer won't take the time to do this. The customer already does this," said Amy Webb and pointed to social media.

Just look at a person's Instagram versus their LinkedIn profile. Do they share the same information on Facebook as they do on Twitter? Imagine a world where your dating app profile photos and texts are used in professional contexts.

Thank you for reaching out!

You will hear from us shortly.